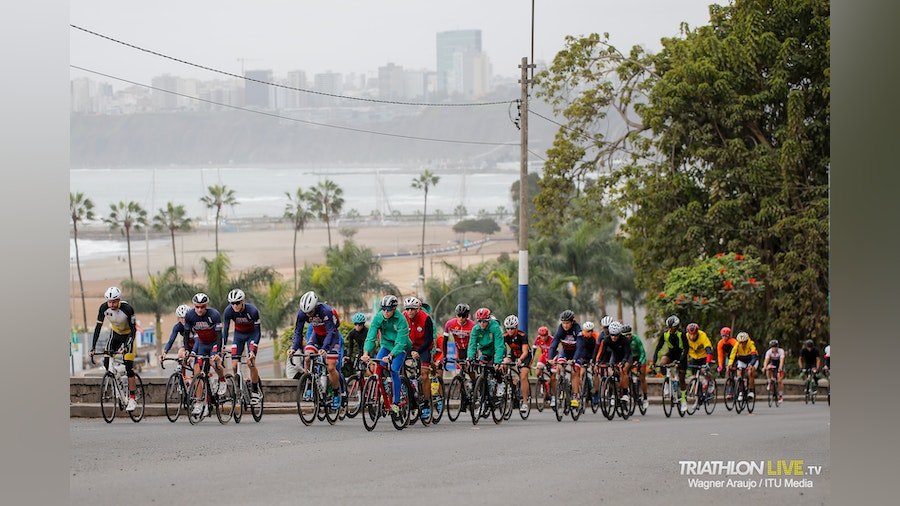 Peru’s coastal city of Lima welcomes athletes to the 2019 Lima Pan American Games. Triathlon is on the schedule with the individual events being staged on Saturday, 27 July and the iconic mixed relay event on Monday, 29 July.
Chorrillos, Lima, will set the stage for the triathlon events. Elite athletes will race across an Olympic distance format, for the individual races, consisting of a 1500m swim (2-laps), 40-km bike (6 laps) and 10-km run (4-laps) which will encircle the venue and provide fantastic entertainment for spectators and fans.

Elite men’s preview
In the elite men’s race Mexico’s Crisanto Grajales will return to defend his Pan American Games title. The Olympian from Mexico was awarded the gold medal at the 2015 Toronto Pan American Games, which secured him an automatic qualifying spot for the 2016 Rio Olympics.

“I am excited to be here in Lima and defend the title for the Pan American Games. I’ve had a strong block of training leading in, I am feeling ready and looking forward to racing. It’s always an honour to represent Mexico, we have a great team here to perform and it’s exciting to have the mixed relay on the schedule as well. It’s an important time for all athletes especially with the Olympic Test event next month,” said Crisanto Grajales.

A strong contingent of Mexican athletes, who have been on a solid training camp together ahead of the Pan American Games, will line up in Lima. Olympian Irving Perez, who claimed the bronze medal in 2015 and is currently racing the World Triathlon Series and ITU World Cup series, will be vying for a spot on the podium in Saturday’s individual race.

“I’ve had a solid training block leading into the Pan American Games and I am looking forward to racing here in Lima. It’s an honour to be here and represent Mexico,” said Irving Perez.

Brazil’s Manoel Messias will be one to watch on Saturday. The Brazilian ran his way to fourth place in the 2015 Toronto Pan American Games and celebrated on his first World Cup podium in Huatulco, Mexico, in June 2019.

“I am feeling very well. I have been training really well. My feelings about the race reflect what I did in my training and I am pretty happy with what I have done so far. I feel very confident for the race. There are many strong athletes like the Mexicans and Americans. But I have done the hard work and I am confident that I can get a good result for Brazil.” said Manoel Messias.

USA’s William Huffman is another athlete at the top end of the start list, who will have his sights on a podium performance in the elite men’s individual race. In 2015, the silver medal was earned by Kevin McDowell so Huffman will be motivated to keep USA on the podium in the 2019 Pan America Games.

The Pan American Games attracts top athletes across the Continent while also offering athletes, from emerging National Federations, with the opportunity to race on the world stage.

Felipe Barraza from Chile and Juan Jose Andrade Figueroa, representing Ecuador, both honoured to race for their country and will be looking to put together a strong combination. The pair are familiar with racing on the international triathlon circuit, both producing strong results across the World Series and World Cup level of racing.

Riveros will face challenging competition with a strong field of women set to compete, including Luisa Baptista from Brazil who will lead the women to the start line in the elite individual event wearing the top race number. Baptista crossed the finish line in fourth place in the 2019 ITU Huatulco World Cup and was presented with the gold medal in the 2019 Brasilia CAMTRI Sprint Triathlon American Cup.

Elizabeth Bravo from Ecuador has had a superb season with gold medal performances in the 2019 Monterrey CAMTRI Triathlon American Championships and Salinas CAMTRI Sprint Triathlon American Cup and Mexico’s Claudia Rivas who brings experience into the field, will be ones to watch.

“I have been training in my home country of Ecuador at altitude, 2500m high in the mountains with many hills like Lima and it’s cold like Lima. I train hard for this race in Lima and I am really excited. It’s my fourth time in the Pan American Games. The last one, in 2015 in Toronto, I finished fourth and it was a sprint final with Flora Duffy and I am very excited to maybe make the podium this time,” said Elizabeth Bravo.

Cecilia Perez from Mexico, crossed the line in seventh place in Toronto in 2015 and claimed the gold medal in the La Paz CAMTRI Triathlon American Cup in March and fifth place in the 2019 Monterrey CAMTRI Triathlon American Championships in May will be looking to work her way onto the podium in Lima 2019. Perez has been racing the World Triathlon Series circuit and comes into the event with a strong training and race block under her belt.

Erica Hawley, representing Bermuda in the 2019 Pan American Games in Lima, is another athlete who is part of the ASICS World Triathlon Team, an initiative to support developing athletes and nations in the sport of triathlon. Hawley will be looking to put together her best performance on Saturday.

The triathlon action will then continue at 9.00hr local time on Monday, 29 July with the dramatic Mixed Relay event, where the mix of international teams will have the opportunity to battle for team pride and supremacy.  The relay teams will line up for the 300m swim, 7km bike and 1.7km run course, knowing that explosive power is often the winning formula across this format. The Triathlon Mixed Relay will make its debut in Tokyo 2020.