The Leeds crowds were never off their feet on Sunday afternoon as they cheered home the latest graduate of Great British triathlon’s talent school, Georgia Taylor Brown. The 25-year-old delivered a sparkling debut WTS gold, clearly inspired once more by the surroundings as she played her hand early in the run and never looked back, going one better than last year’s silver with a mature, assured display.

“I had a really good swim, I want to thank Taylor Spivey for that,” said a delighted Georgia Taylor Brown after the race. “She got us in a good position around the first buoy, and then I fully committed in the swim, even though that really hurt. So much so that I was worried about how the bike would go, but then with Katie and Sophie we got things moving, and we worked really well as a group. The plan before the race was to run hard, but when we got out of transition I thought that maybe we couldn’t do it. I just tried to stay relaxed and in the last kilometre I was just enjoying myself.”

Conditions were close to perfect on an overcast Yorkshire afternoon at Roundhay Park, where two laps of Waterloo Lake awaited the athletes.

It was another brilliant swim from Jessica Learmonth that saw her out of the water first, Brazil’s Vittoria Lopes right with her and GB’s Sophie Coldwell also in close company. The dependable sight of USA’s Taylor Spivey and Katie Zaferes also mounting their bikes among the leaders meant they were well-placed for the 12.3km point-to-point, Taylor Brown and France’s Cassandre Beaugrand completing the seven-strong lead group heading out of Roundhay Park.

Further back, the likes of 2018 winner Vicky Holland and compatriot Non Stanford were looking to get organised in a large group that included Maya Kingma (NED) and Angelica Olmo (ITA).

They were soon joined by Beaugrand as she fell back on the first of seven laps of the technical city centre loop. Meanwhile the front six continued to work well and had extended their lead to 1:40 by the bell, Lopes still hanging on at the back but setting herself for a challenge on the 10km run.

That challenge rarely looked likely, however, as Taylor Brown and Zaferes stretched out a lead early on in the first 2.5km lap and, clearly feeling fresh as she bounded through the streets, the Brit then played her hand early on in the second, stretching away from the Series leader to challenge the American’s 100% record so far this year.

That lead quickly built up to 14 seconds but Zaferes responded well and, to the surprise of nobody, never let Taylor Brown out of her sight. At no point could she really eat away at that gap, though, and it was the Manchester born, Leeds-based star who afforded herself a glimpse over the shoulder with 200m to go to cue a huge smile as she realised for the first time that the WTS Leeds gold was undoubtedly hers.

“I am really happy,” said Katie Zaferes after her silver. “Last year I struggled in the bike section, and during the race today I was just thinking that it didn’t hurt so much. And Georgia then ran so well, and ten seconds never seemed so far away, I never gave up. Racing here in Leeds is different, but I quite like it. This was the last Olympic distance for a bit so i’m excited for heading to some sprint distance races now.”

“It was two hours of pain, and it really hurt,” admitted Jess Learmonth, “but I love racing here, the pressure of so many people cheering for you, the crowd is unbelievable.” 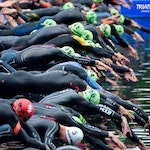 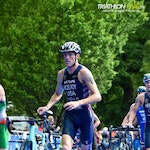