by Chelsea White on 26 Aug, 2017 01:08 • Español
Becoming only the second woman in ITU history to have won five World Triathlon Series races in a single season, Bermuda’s Flora Duffy secured the place in history after a dominating victory at the 2017 ITU World Triathlon Stockholm. The win secured her the overall Series leader position going into the Rotterdam Grand Final next month as she will enter the race with a perfect score of 4000 points in the effort of retaining her world title.

Becoming only the second woman in ITU history to have won five World Triathlon Series races in a single season, Bermuda’s Flora Duffy secured the place in history after a dominating victory at the 2017 ITU World Triathlon Stockholm. The win secured her the overall Series leader position going into the Rotterdam Grand Final next month as she will enter the race with a perfect score of 4000 points in the effort of retaining her world title.

“I was very happy with today to execute a solid race in the swim, bike and run. My swim has been a little shakier this year so it was nice to come out third behind Jess (Learmonth) and Lucy (Hall), it was a perfect position. And then onto the bike we were hammering on that first lap to create a gap and that kind of set the race up perfectly,” Duffy said.

Speaking of her position before Rotterdam, “That is the reason that I came here, I had five pretty good scores before today, but as you said you never know what is going to happen. With the Grand Final being points and a half you kind of want to go in there with have the biggest buffer that you can to make sure you can absolutely give yourself the world title.”

Taking the silver medal was Great Britain’s Jessica Learmonth, who earned her first career WTS medal, while the bronze went to Aussie Ashleigh Gentle who had a come-from-behind performance that gave her a fourth podium finish this season.

Learmonth said, “It is amazing, I can’t really believe it to be honest. It was hard work, but I am delighted.”

While the day before in Stockholm it was overcast with rain in the forecast, the skies cleared just in time for WTS racing. With a pontoon dive, the women first had to overcome a longer 1000 metre lap followed by a second lap of half the distance at only 500 metres.

The British were the swiftest in the water to start as Learmonth and Lucy Hall managed to get out in front. The distance of the first lap really separated the field into a long line of swimmers with small groups gaped out among the course. Duffy kept up with the consistency of her swim this season and remained just on the heels of the two Brits.

Staying the leader throughout, Learmonth exited the water first for the third time this 2017 season, followed by Hall, Duffy and Katie Zaferes (USA).

Great Britain’s Jodie Stimpson lined up for Stockholm to compete in her first WTS race back from injury since Gold Coast. While she had an excellent swim that left her only 15 seconds back from the leaders and a chance to make the lead bike pack, an early start from the pontoon doomed her with a 15-second penalty she was forced to serve during transition.

Gentle and Andrea Hewitt (NZL), the only two women besides Duffy to have won a WTS race this year, were 1:17 back out of the swim, which caused them to fall into a second chase pack on the bike.

The first few laps of the bike saw Duffy, Learmonth and Zaferes really hammering away in an effort to gain time and distance. Unfortunately, a tight corner on the third lap caused Zaferes to lose her grip and crash out of the race, leaving Duffy and Learmonth to pedal as a duo.

Gaining no lost ground, the two continued to increase their gap from a pack of 10 women behind them that included Stimpson, Kirsten Kasper (USA), Joanna Brown (CAN), Alice Betto (ITA) and Leonie Periault (FRA), who was making her WTS debut in Stockholm. Heading into the final laps, they were behind by about two minutes.

A second and smaller chase pack that included Gentle and Hewitt worked tirelessly to decrease their space, but into the second transition they were down by 2:53 before the run.

It took no time wasted for Duffy to sprint off into the sunset once onto the run, leaving Learmonth alone to battle for a place on the podium. While they had created enough of a time margin to run with a tiny bit more of ease, the pressure is still on with the running strength of those who were behind them.

No one was a match for the Bermudian however as she only gained time during the hard 10-kilometre course. She entered the blue carpet with plenty of time to spare and snagged the finishers tape for the fifth time this season and seventh time of her career, making the victory even sweeter knowing that she repeated her win in the same venue where she earned her first WTS career win in the year before.

Learmonth held off to her second place and claimed the silver 1:21 after Duffy, becoming only the 13th woman to step onto the WTS podium this 2017 season. She also became only the 5th British woman to make the WTS podium.

The bronze then went to Gentle who came just 10 seconds after Learmonth. An impressive performance from the Aussie since she executed the fastest run split time of the race at 33:27.

Gentle said of her come-from-behind bronze honour, “To be honest I didn’t think I would be standing here today. I was basically just doing a two-up with Andrea (Hewitt), there was only about two people in that group working really. I know there has been times when I didn’t think I had a chance but I stuck with it and I ended up having a good result so I am pretty pleased.”

The rankings then going into the Rotterdam Grand Final will see Duffy in first with a perfect score of 4000 points, Gentle in second with 3507 points and Hewitt in third with 3224 points. 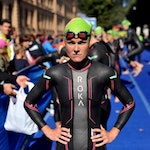 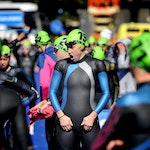 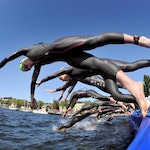 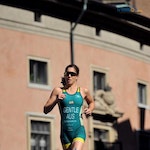 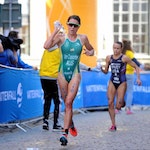 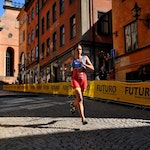 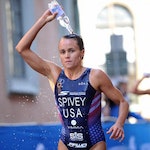 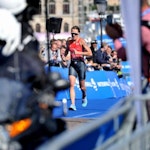 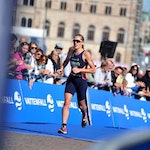 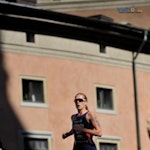 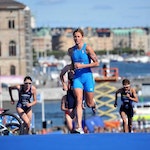 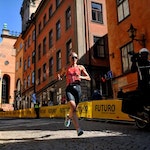