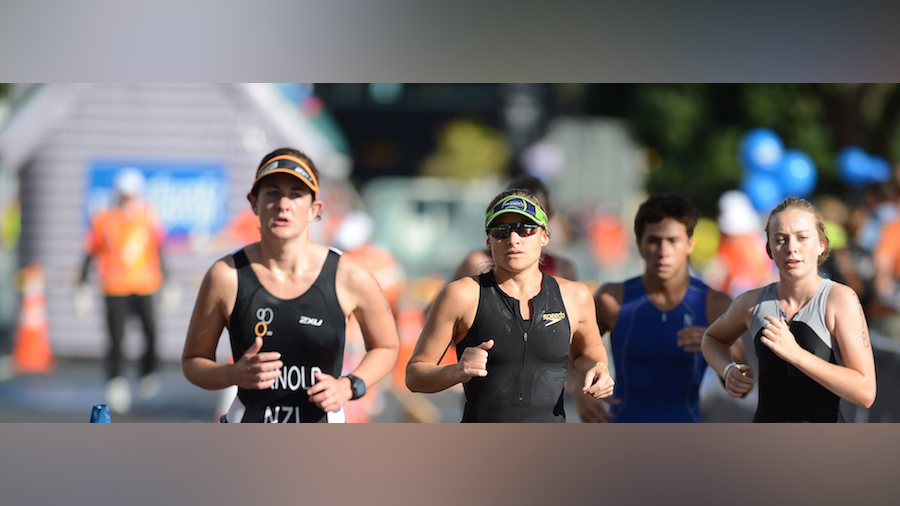 The racing continued in Auckland on Sunday morning as the age-group athletes got their chance to compete after yesterday’s action packed elite men’s and women’s racing that saw Spanish sensation Javier Gomez and Germany’s Anne Haug victorious in the opening round of the ITU World Triathlon Series.

A huge contingent of age-group athletes had a choice to compete in either a sprint distance (750m swim, 20km cycle, 5km run) or Olympic distance (1.5km swim, 40km cycle, 10km run) as individuals or teams. This morning’s racing also included a Paratriathlon.

Some of the rising stars of New Zealand triathlon were out in force this morning posting some impressive times and performances. First to cross the line today in the sprint distance 13-15 category was Daniel Hoy, who only took up the sport two years ago and looks set to have a very promising future under the guidance of Nathan Richmond. Daniel was coached by renowned New Zealand sports coach and businessman Jack Ralston prior to his passing last August.

Ralston, coached a number of elite athletes in triathlon and distance running for over 40 years and was a former mentor of 2004 Olympic triathlon champion Hamish Carter and prolific Ironman winner Cameron Brown.

“I had a pretty solid swim,” he said. “A little bit back from the first person out and managed to catch them on a couple of the hills going through Queen Street and then just went hard on the bike, and just held on in the run. It’s a pretty big event, heaps of people hear to see which is great.”

“It was really good, I’m not a great swimmer but had a good swim and then the bike was pretty good, and had a good run as well, it just went to plan.”

Catherine says her strength is definitely the run leg and hopes to make it to the Olympics.

First to break the tape in the Olympic distance triathlon was 20-year-old Matt Franklin.

“Yes, he usually beats me but he hasn’t trained for the last four weeks so a bit of an easy win for me,” Franklin said. “It was my first win against him, so I’m pretty happy, I’ll be holding onto that for a while.” Former New Zealand steeplechase and cross country representative Fiona Crombie showed what a great all round athlete she is in claiming line honours in the women’s Olympic distance event. Crombie was diagnosed with arthritis at the age of 24 but has dealt with it by managing stress, medication and exercise.

Also taking up the triathlon challenge, some of New Zealand’s high profile names including former test cricketer and TV personality Mark Richardson who anchored his team doing the run leg.

“I was looking good heading out… I knew my team had put me in the lead so I was running scared…I think some of the other media are going to cry foul, but I’m just a better organizer and have better logistics than what they are,” Richardson said.

The TV NZ Breakfast crew also got involved doing their first team triathlon, Toni Street swam, Christie Rawdon did the bike leg and Sam Wallace brought it home for the team on the run.

“That was hard - the rest of the team did their job and brought it home as best I could, 21.46 for the 5km is alright,” Wallace said.

Full results will be available on auckland.triathlon.org.